Fred Parker, chairman of the Ontario Grape Growers’ Co-operative, delivers the first load of grapes, for juice, at the newly completed plant on Yale Crescent, St. Catharines. The year is 1948. The plant was later taken over by Powell Foods. 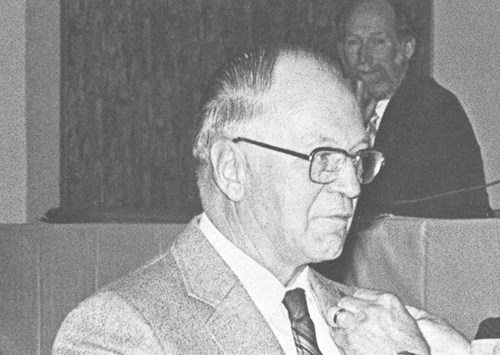 “The appointment of a seven man Board to control and regulate the marketing of grapes for processing is announced in the latest issue of the Ontario Gazette.”

The first meeting of the Local Board of the Ontario Grape Growers' Marketing Scheme was on September 23, 1947, in the Agricultural Hall which in those times was on James Street in St. Catharines. It was likely a lengthy meeting, for the chairman, Horace Kilman, reported he had been in touch with the chairman of the Farm Products Marketing Commission, Mr. F G. Perkin, in Toronto, to check whether the Order for the Grape Processors had been sent out. Understandably he was interested in any reaction by the processors to the setting up of a marketing board for growers. The minutes relay: “He was informed that a minority group of wineries were retaining Senator Bench (Senator Joseph Bench was a widely respected lawyer) to try and repeal the decision reached by arbitration. Mr. Perkin didn't know off hand what they could do in trying to get a reversal of the Order but the main thing for the growers was to get the grapes off and worry later if need be. The Wartime Price & Trade Board had approved, and the Ontario Government had approved, and the Order would be in the hands of processors this Thursday.”

"Meeting discussed reaction of processors whom they had contacted. They were all wineries and though far from happy the need for grapes was so great it was felt there would be no contract cancellations.”

"The opinion of the meeting seemed to be that 1948 would see a very stormy negotiating session."

The Board rented office space from the Royal Bank at 1 Queen Street, in St. Catharines.

In February 1948, the Directors were advised the building was to be renovated and rental costs would be raised to $1.35 sq. ft. And so, the move was made to 3 King Street.

Per diems were set at $5 for daytime meetings, or $4 for evenings with travel allowances of 10 cents a mile. A fireproof safe was added "to protect processors' cheques during the period they were in the office," and an advertisement was approved for the Niagara Fruitman "urging all growers of processing grapes to mark their ballots in the forthcoming vote to be taken on the continuation of the Marketing Scheme."

While the vote carried handsomely the underlying problems facing growers could not be resolved so simply. In years of bountiful crops growers scrambled for buyers and invariably thousands of tons remained on the vines. Understandably, alarm bells started ringing when the country's largest winery, T.G. Bright, advised that they would not be "in the market for wine grapes other than those on long term contract."

With a unified organization, growers were able to set-up committees to work on special issues, including liaison with the wineries and presentations to governments.

Research had quickened at Horticulture Research Institute of Ontario (HRIO) towards a change-over to a table wine industry with 22 French hybrid varieties being brought in for testing, while T.G. Bright recruited the legendary Adhemar De Chaunac to head their research team.

In 1947 the Financial Post reported 15,000 acres of vineyards were delivering grapes to 22 wineries. It was “snip-snip” work with 1,000 tons being harvested a day, and trucks rolling into wineries every 15 minutes. Winery buying was 36,000 tons, bringing $2.5 million for growers, and $2 million for governments.

One year after the Marketing Board was founded, the “largest and most modern plant of its kind in Canada” was opened by the Ontario Grape Growers’ Co-operative to process grape juice. The cost was $500,000; a massive amount of money in the frugal Forties. It meant jobs for 30 people year-round; financing was through shares, ($200,000), and second mortgage bonds at $500 ($300,000). Fred Parker, a director of the Marketing Board was president. The Welch’s Grape Juice Company from the States was paid a seven per cent commission to run the operation. Welch’s had formerly operated a plant in St. Catharines, and still had a sales office at 202 St. Paul Street when the Yale Crescent plant opened.

This was a bold venture, with the opportunity for a grower to “... assure yourself of future security, and a permanent market for your Grapes.” By any measurement it was a remarkable success for the industry. Yet it was a rough financial ride. The plant was taken over by the Powell family, from Montreal.

In the third year of the Board, wineries accused growers of greed in “... killing the goose that lays the golden egg” through demands for higher prices. Each ton of grapes for wine needed 75 pounds of sugar, and the chairman of the LCBO told the arbitrator that 65 per cent of Ontario’s wines sold at the base price of 60 cents, while foreign wines from Australia were sold in the $1.20 -$1.50 range.

Anything over $70 a ton “would force processors to cancel all contracts,” A.G. Sampson claimed in his appeal against the arbitrator’s finding. The price remained at $90, anyway.

Before the forties closed, commercial plantings of French hybrids such as De Chaunac, Foch and Chelois, were maturing in Niagara’s vineyards. Rodger Whitty, Ronald Moyer, Roy Johnson, Roy Masterson, and Bruce Lambert were amongst the earliest pioneers. The future was unfolding. 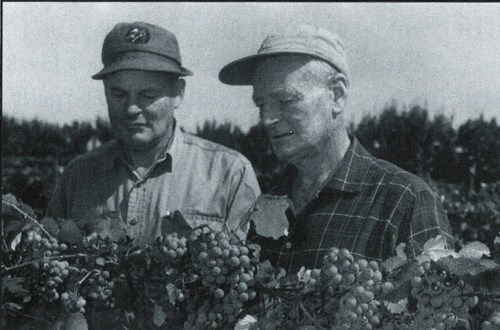 Fred Parker, the Board’s first Vice Chairman, inspects a bumper crop of Concords with his son Harry, at the family’s vineyards on Third Street Louth.