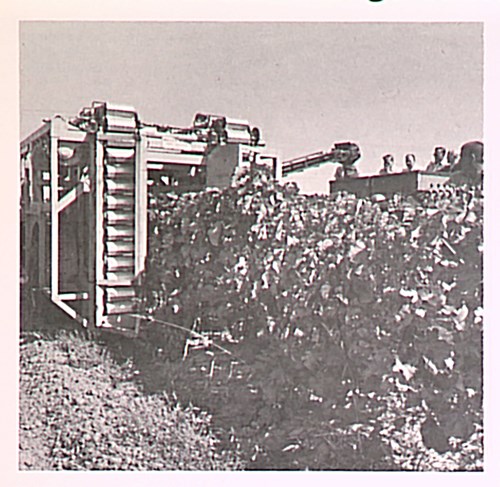 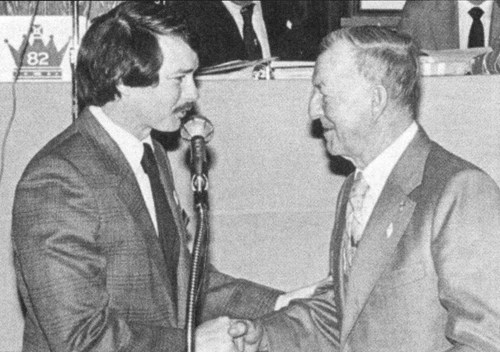 Sim House, the fourth board Chairman, gets his past Chairman’s pin from Art Smith. 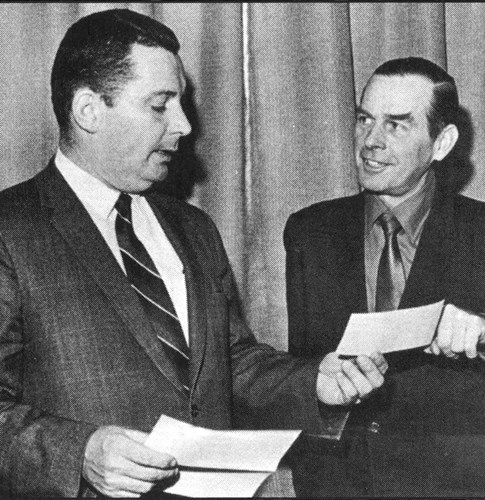 Ronald Moyer hands over a cheque for $5,000 to Dr. John Archibald, director of the Horticultural Research Institute of Ontario, for viticultural research in 1969. 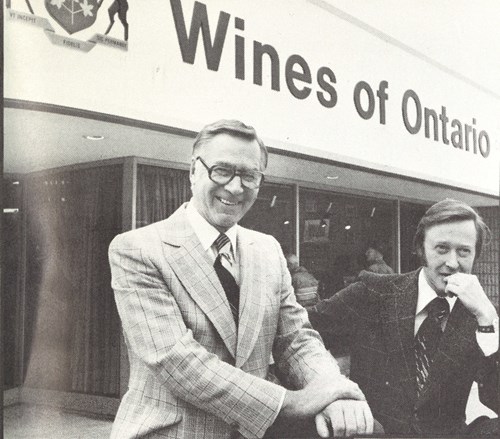 Keith Matthie, right, with the Ministry of Agriculture and Food’s Doug Williams at Ontario’s first “Wines of Ontario” store. Keith was the Board’s first secretary/manager, 1953 - 1977.

Canada’s peculiar network of ten parochial market groups, each with its own regulations for wines, encouraged other Provinces to license wineries that were no more than bottling plants for imported products. By 1964 both Alberta and Saskatchewan had gone this route, and the possibility of sea-to-sea access for Ontario’s wines crumbled.

George Stewart had been a director since 1949 and Chairman for seven years when he decided to step aside, and the Sixties opened with Sim House chairing the meetings.

Sim reported a record harvest, at 55,000 tons, which he diplomatically described as “being of variable quality.” He was already an experienced negotiator and in 1960, together with Vic Scull and Ron Moyer representing the growers, the price for wine grapes reached $95 a ton - finally climbing back to the level of 1947.

When speculators moved in, buying at very low prices from growers who did not have contracts and then selling to processors at full price, the Board took court action.

French hybrids were becoming a force. In 1961 they made up 6.6% of winery buying yet just Delaware and President earned the $50/ton premium. The negotiators pushed for change. The following year, with Keith Wiley replacing Vic on the bargaining team, Dutchess, Foch, Seibel 9110, Chelois, Seibel 6468, Muscat, and J. Riesling were added to the premium list.

When news that Brights Wines had planted 100 acres of Elvira reached Keith Wiley, he filed a complaint with the Board, saying a “gentlemen’s agreement had been struck that only experimental varieties would be planted by Brights.” It got nowhere. The following year the company added Agawams. Keith recalls “ … lot’s of horse trading in negotiations. One year we were so frustrated we went to mediation over $2 a ton. The arbitrator said look, why don’t the wineries up their price by a dollar and the growers drop theirs’s by a dollar, so I can go home for dinner?” And so, the base price moved to a record $102/ton.

The Board’s business style was maturing, meaning more meetings and strategizing of the directors.

In the mid-sixties, government relations, or organized lobbying, was something mysterious few agricultural groups cared to tackle. The Growers’ directors recognized the need.

By 1965 government relations was coming into the forefront through meetings with MPPs and MPs; the Minister for Agriculture, the Honourable William Stewart; and the chairman of the LCBO. The motivation was a record crop of 63,000 tons, with 5,000 tons left hanging on the vines.

“More and more time will be spent with governments,” noted the annual report for the year. “There is more to be gained here than from any other course of action.”

That year Ron Moyer joined a government study mission to Europe, where he lined up buyers for Ontario’s wines on the continent, then established a system of three-times-a-year samplings at Canada House, London, for Chateau-Gai, Barnes and London wineries, all of whom were then exporting to the U.K.

The Growers’ first printed annual report covered the 1966 harvest year. A nine-category system for classifying grapes had been agreed by the recently formed Grape Advisory Committee, and the 37,000 tons of grapes purchased by wineries included 6,300 tons of French hybrids.

Sales to wineries meant $3.4 million for growers, while governments enjoyed a windfall of $17 million, leading to Ron Moyer’s widely quoted comment: “At $1,300 to the acre this is the most profitable crop of all time - for governments.”

Ron Moyer promoted relentlessly throughout his 15 years as head of the Growers. He was the first “figure head” in marketing for the grape and wine industry; prominent in the public eye through newspapers; constantly quoted on television. “There was little public understanding of the progress and the good wines that were coming from Niagara. As Chairman of the Ontario Grape Growers Marketing Board, I seemed to have some credentials and we ran as hard and as far as we could.”

He caught the attention of the government.

His greatest supporter was a freshman MPP at Queen’s Park, Bob Welch, who became a heavyweight in Cabinet and Ontario’s first Deputy Premier.

A pipeline into government had been opened based on honesty and mutual respect, and it functions equally well today.

Growers were not alone in going the government route. The Canadian Wine Institute tabled concerns that growers could not supply the quantities of grapes they would need and called for a change to legislation to allow imports of viniferas. Bob Welch brought a bus load of LCBO chiefs for a day of touring vineyards including the Staff farm, and the HRIO. They left well satisfied.

Between 1965 and 1969 growers were adding 300,000 new vines a year. Varieties for premium wines dominated. The quiet revolution to a French hybrid and vinifera industry was gathering speed.

In 1968, based on “their success at running the Niagara Grape and Wine Festival” the Ontario Editorial Bureau was brought in to help sharpen promotions and public education, and give guidance on government issues.

As the decade ended, despite the storm clouds gathering, sales of Ontario’s wines hovered around the eight million gallons mark. “You may ask now for Ontario wines in dining cars of the CNR, and aboard Air Canada flights,” the Chairman reported.

Ontario’s wineries were accustomed to selling what they made in times of low volume competition from imports.

Then wineries opened in the prairie provinces using California juice for their raw product. These were risk-free ventures, guaranteed preferential listings and favourable mark-ups by their local liquor boards. By 1968 they were demanding listings in Ontario while Ontario’s wines were being pushed off the store shelves in the west. California and Australia muscled into the B.C. market. The west was being lost.

The tailspin of sales didn’t seem catastrophic at first. In the following decade out-of-province shipments of Ontario wines plummeted by 50 per cent, dropping by more than two million gallons a year. 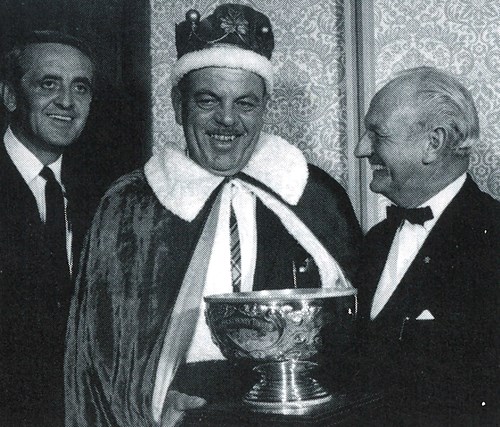