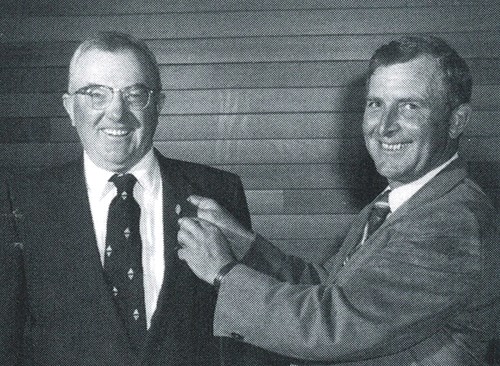 Brian Nash presents the past Chairman’s pin to Keith Wiley. 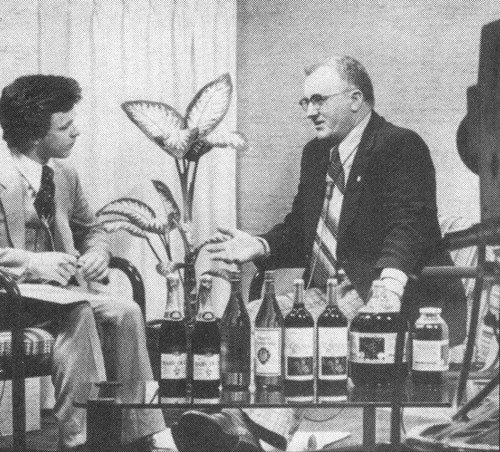 Keith Wiley was part of the growers’ promotion team and is shown during a live talk show on CKNYTV, 1979. 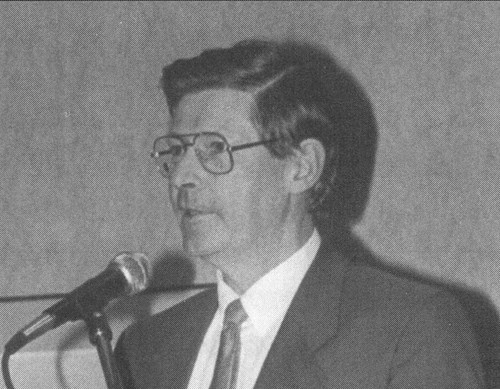 Jim Rainforth, secretary manager since 1977, celebrated 20 years with the Board this anniversary year. 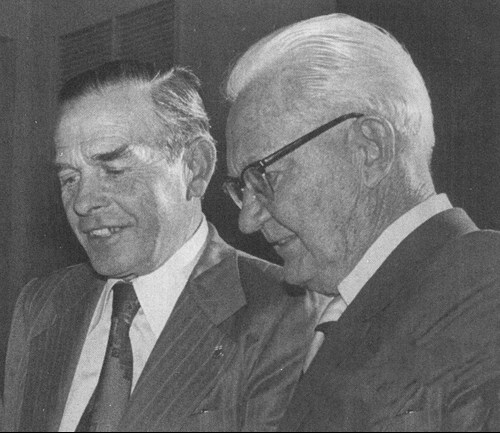 Ronald Moyer, Chairman of the Grape Growers, with Meredith Jones, former president of Brights Wines and the Canadian Wine Institute. 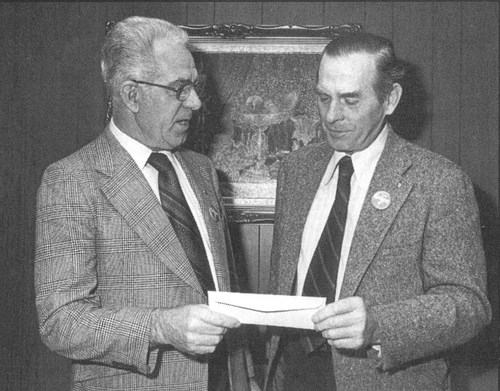 “Ontario has not been called the land of opportunity without just cause. Ask any foreign wine importer.” - Ron Moyer, 1970.

The Seventies opened with Ontario commanding 73 per cent of wine sales within the Province. In the span of just eight years, they were to be elbowed into second spot. Subsidies in other countries reaching hundreds of dollars on a ton of grapes for export wine powered the advance of foreign wines.

Worse, all too frequently Canada’s exports ranging from machinery to raw materials were paid in whole, or part, by wines flooding into Ontario. European and Soviet bloc countries landed wines at less than the price of packaging, dumping their surpluses and scrambling for hard currency.

This was a decade of remarkable progress, of big achievements, and matching crises.

In 1970 Allan Eastman planted a four acre vineyard at Cedar Springs in Kent County and within a few years had expanded to 35. The Moyer family started developing an 80 acre vineyard at Colchester, Essex, the same year, without subsidies or support, signalling the rebirth of a grape and wine industry in “the sun parlour of Ontario.”

Ron Moyer selected a site, but before signing he met a neighbouring peach grower. “I asked him how often he’d had winter damage. He said never, and that was good enough for me.” The Moyers reserved 27 rows for experimental plantings in this specialized wine-grape vineyard.

Today Southwestern Ontario (District 5) harvests more than 2,900 acres of vineyards and is home to a growing number of wineries.

Her Royal Majesty Queen Elizabeth and Prime Minister Pierre Trudeau were in Niagara and sampled our wines. The Governor General and Lieutenant Governors came, and while Bob Stanfield never did get the key to 24 Sussex Drive, his every move as an honorary parade marshal of the Festival was promptly reported by commentators.

Premier Bill Davis, another parade marshal, stated he wanted to “assist in developing better markets and income stability for the future.” Former Prime Minister John Diefenbaker visited Niagara’s vineyards a couple of times, but most significantly the Honourable R.S.K. Welch was here all the time.

“He returned all our calls the same day,” Ron Moyer later recalled. “Eugene Whelan, Canada’s Minister for Agriculture, was the same.”

“We can never allow a crop to be so tragically wasted as the 1971 surplus,” the Board Chairman told the annual meeting in 1972. The Board acted swiftly in 1975, and again in 1976, when surpluses totalling 23,000 tons shocked growers.

The bridge building into government showed its value. The 1975 surplus was bought by the Board through loans backed by the Province, and senior governments also picked up the costs of processing and storage.

Wineries bought 43,500 tons in the following year when the harvest reached 85,000 tons; again the surplus was heavy with French hybrids which had been hailed as the salvation of the industry. Major tonnages became brandy under Otto Reider’s skillful care; the Board introduced its own label, Small Cask at $7.25 for 750 ml, and it sold well.

Time proved this aggressive approach by the directors was the way to go. Of the 23,000 tons purchased, within one year 21,850 tons had been sold with the proceeds used to offset the costs of the program. 8,500 tons had gone for brandy.

Adversity sparked a remarkable reaction through the formation of the Niagara Grape Growers’ ACTION Committee. Headed by Myra Masterson this group worked with vigour, pioneering grape juice in school cafeterias; operating wine gardens; linking with any other group marketing Ontario’s wines or grape juice. ACTION toiled tirelessly and cheerfully and were ready to challenge out-of-date thinking at the drop of a wine glass. Outspoken, determined, ACTION opened doors for marketing that traditional approaches had failed to penetrate.

The ‘short crop’ of 1972 left wineries with only 39,500 tons, leading the Canadian Wine Institute to voice its concerns for the future. It tabled studies showing that “by 1977 our wineries will need 92,000 tons of grapes,” and called for permission to import grapes. In 1977 winery buying was 34,400 tons. 2,500 tons of grapes were left unharvested.

The wine market was maturing, competition toughening, and surpluses continued. The Marketing Board agitated for standards that would recapture consumer confidence and so the Ontario Grape and Wine Standards Committee was formed.

Dr. John Archibald, head of the Horticultural Research Institute at Vineland, Ron Moyer and Keith Wiley for the growers, and Ed Arnold and W.E. Finlay of the Canadian Wine Institute, tabled their findings in 1977. It was the blueprint needed for progress, setting standards based on sugar levels for every variety of wine-grape.

In addition, grapes were to be tested before harvesting; a strict code for labelling was implemented; uniform classifications covering vintage and varietal wines were prescribed, and an “Ontario Superior” designation created. In future all wines, foreign and Ontario, would need to satisfy a tasting panel before they could be sold in Ontario.

William Rannie in Wines of Ontario refers to this report as “one of the biggest steps to maturity.”

Of the 51 new Ontario wines introduced that year 50 were varietals grown from French hybrid and vinifera grapes.

Research completed over ten years by Dr. Humberto Dias at the Agriculture Canada Research Station in Vineland Station, resulted in a heat treatment for the elimination of viruses from grape vines. This painstaking procedure opened opportunities for upgrading vineyards and reducing vine losses. It was a quantum leap forward.

Vines of 34 varieties of wine grapes were produced free of known viruses, and these became the “nuclear” stock. From these tiny samples, a 15 acre mother block of “elite” stock was developed, under an Agriculture Canada grant applied for and obtained by the Ontario Grape Growers’ Marketing Board. This “elite” block was to be managed by the Marketing Board, including the distribution of material to Ontario and Canadian nurseries over a period of 14 years. The goal was for the nursery industry to develop their own mother blocks of scion and rootstock material.

The project was initiated in 1979 and continued until 1995, an extension of 2 years beyond the 14 years agreed upon, in order to accommodate the requirements of new nurseries interested in establishing their own mother blocks.

The profitability of vineyards relies on healthy grape vines just as the quality of the wine is dependent on healthy fruit. The research by Agriculture Canada and the subsequent delivery of this program by Ontario’s grape growers provided the tools to rejuvenate the grape and wine industry.

The pace of consumer-awareness programs and government contacts stepped up several notches in the 1970’s. Ron Moyer’s meetings in Queen’s Park with members of Cabinet and senior civil servants were more frequent, and many times not arranged in advance. He was seldom kept waiting and never turned away. He spoke at all times for a unified grape and wine industry, showing no patience for us-versus-them confrontations.

This resulted in foundations being laid which would benefit growers immensely in the troubling times to come.

“I went to my first annual meeting of the Grape Growers of Ontario in 1979. Ron Moyer was the chair of the Ontario Grape Growers Marketing Board back then. And Mr. Moyer ran a meeting with an iron fist, like he was a very strong leader and I looked up to the podium and I said to myself, ‘Man, I can only look up to this guy.”  - Albrecht Seeger

In their rush to plant wine varieties, growers felt frustrated by the lack of clear direction. Hindsight showed that was no simple task. As supplies of Foch, De Chaunac, Chelois and other red French hybrids neared 20,000 tons in the mid ‘70s, consumer tastes suddenly swung to white wines. Ontario was not prepared. “I was the biggest grower for Foch and De Chaunac,” says Ron Moyer. “We negotiated lower prices for these so we could get more dollars into white varieties. This moved tonnage and gave growers a planting incentive. Inside four years 2.7 million white table wine grape vines were in the ground.”

Keith Matthie served as Board Secretary for 24 years before leaving in 1977. His replacement was Jim Rainforth, who was recruited from the Ministry of Agriculture and Food, where he was director of the Soils and Crops Branch.

Ron had made clear his intention not to seek re-election following the 1979 harvest year. He later handed the gavel to Keith Wiley after completing 15 years as Chairman of the Board. In his first term, sales for processing were 50,000 tons bringing $5.26 million at the farm gate. By the final year grower-income had climbed to $15.65 million, and Ontario’s wineries reported sales of 46 million litres.

In his farewell address he urged growers “... to be more active at the political level... and in marketing. Do not criticize others but accept help with gratitude.” 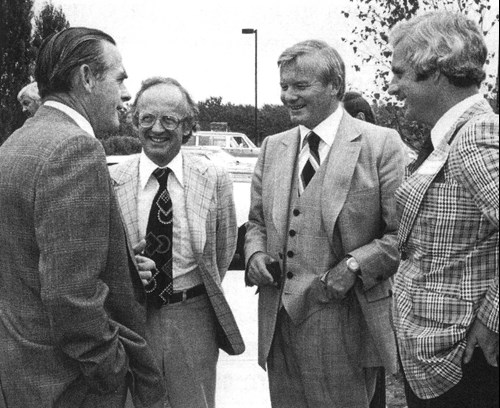 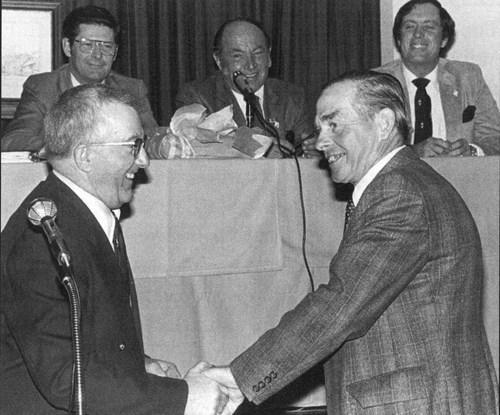 * Action held numerous tasting events for local area restauranteurs in a successful effort to ensure that the hospitality community features local wines on their menus and in their marketing.

* Action held larger wine gardens and festivals to introduce the public at large – including an increasing volume of tourists – to the quality and value of Niagara wines.

* Action ventured further afield than Niagara with events all over southern Ontario, including a large public tasting at Toronto’s Union Station and an annual public wine garden at The Royal Winter Fair.

Within a year of it’s founding, Action and its volunteer army had boosted sales and interest in Niagara grape products and made solid inroads into debunking the widespread perception that Ontario wines were somehow inferior to imported vintages. In December of 1977 at the 82nd Niagara Peninsula Fruit and Vegetable Growers Association convention, the Right Honorable Eugene Whalen, Federal Minister of Agriculture, presented Myra Masterson with two engraved silver goblets in recognition of her organization’s achievements. In unscripted comments at the event, Minister Whalen stated that the other agricultural producers attending the convention could benefit from emulating Ms. Masterson’s efforts and marketing savvy.