For a quarter of a century MPP Bob Welch was a towering champion for Ontario’s grapes and wines, as a leader within Queen’s Park and through his extensive personal contacts.

Jim Bradley, who also served with distinction in Ontario’s Cabinet, and the Honourable Eugene Whelan, Canada’s long serving Minister for Agriculture were also outspoken proponents for the industry. 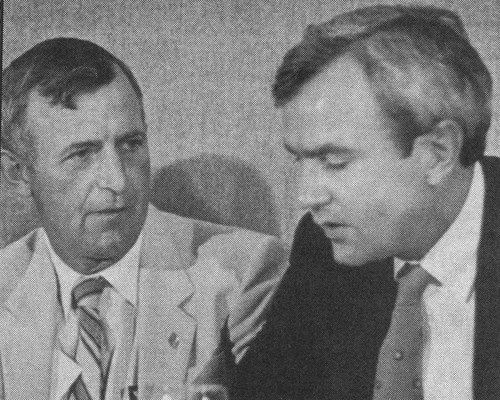 Brian Nash and Premier David Peterson meet for their first time when they were head table partners at the 1985 Celebrity Luncheon. 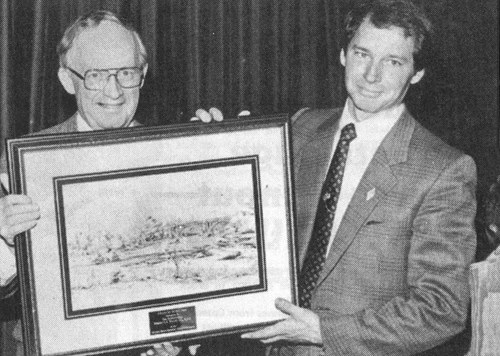 Bob Welch, Ontario’s first official deputy premier, was the foremost supporter and mentor, for Ontario’s grape industry throughout his close to 30 year term at Queen’s Park. He was honoured in 1984 with the Board’s Award of Merit, presented by Art Smith.

MPP Jim Bradley earned the title of Minister for Wine during the years he served in the Cabinet of Premier David Peterson. His work helped win Provincial support for the growers in the Free Trade Act negotiations. He installed Len Byl as Grape King. 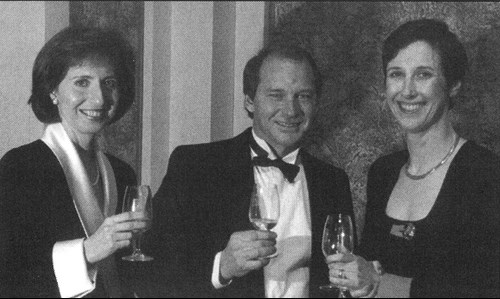 The big story of the Eighties was the explosive growth in supplies of the foremost grapes for table wines. In 1979 just 38 per cent of winery buying was French hybrids and viniferas. Within ten years the supply had risen to 90 per cent.

The role of the Horticultural Research Institute of Ontario at Vineland cannot be overstated. Dr. John Archibald was a strong supporter. The meticulous work of the chief research scientist, Dr. Angus Adams, and hybridizing programs operated with thoughtful precision by Ollie Bradt, significantly expanded the body of knowledge related to growing grapes and wines in Ontario.

Winery buying was to peak at 55,500 tons in 1983; of these 35,500 tons were the preferred varieties. Yet these years of patient progress and upgrading were pushed off the news pages as the industry fought for survival.

The turbulent Eighties opened like a blast from a shot gun. Ottawa boosted excise taxes on dessert wines so enormously that the shelf price increased by more than one third. Sherry sales dried up overnight. Chairman Keith Wiley was outraged:

“You’ve created a surplus of 10,000 tons of grapes for this fall,” he told the Federal Government. “This means that one acre of grapes now delivers $8,500 in taxes.”

Growers took their case to the public across Canada through meetings with the media. In one protest, the old Number Eight Highway was blocked by thousands of grape boxes and hundreds of growers. Within months the tax reverted to the original level. Sherry sales slowly climbed. Without the co-ordinated action by the Board there would have been an abrupt, damaging, and permanent loss for Ontario’s grape and wine industry. Under Keith’s leadership the Board went on the offensive against the plentiful supply of low priced, heavily subsidized, foreign wines carried by the LCBO. The strategy was simple; a handling charge to cover the LCBO’s additional costs for buying and selling these products.

Brian Nash had the contact. A meeting was arranged with the Treasurer, the Honourable Frank Miller, at his Bracebridge home over the August holiday weekend.

“Frank met us when we got there,” Keith recalls. “He was a car dealer, and if we’d been driving an import he wouldn’t have given us the time of day.”

Keith, Brian, and Jim Rainforth were the strike team. They were well prepared. The Board’s research was meticulous and way ahead of government intelligence.

“Jim gave Frank the proof on the subsidies, then Brian came out and said: ‘If it isn’t 65 cents a bottle it won’t be worth a damn,’ but he wasn’t as diplomatic as that.”

When government buckled under pressure from the General Agreement on Tariffs and Trade (GATT), the Board counter-attacked. It demanded a comprehensive study into the future of wine marketing in Ontario.  The handling charge stayed in place for a further six months, extending its life to 21 months in all.

Growers uprooted 300,000 labrusca vines in 1982, while adding half a million French hybrids and viniferas.

The end of the handling charge brought an end to the selling spree, leaving winery cellars filled to overflowing. More grapes were available from the optimistic times of the Seventies, when demand was strengthening.

The lack of balance between markets and harvests in the years 1984 to 1988, meant surpluses grossing 75,000 tonnes. New Chairman Brian Nash had been busily building more contacts within government. He was well known. The pressure was on. Negotiations were prolonged and tiring. Yet each year a deal was reached with the support of local MPs, MPPs, and the ever expanding network of special contacts.

Support came through the Agricultural Products Board of Agriculture Canada and the Ontario Ministry of Agriculture and Food. The Grape Growers’ Board took on the task of selling the surpluses to recapture the funding which had been advanced. Now another benefit of the pooling of staff resources amongst the marketing boards surfaced. The Central Sales division was housed under the same roof.

Adrian Huisman was put in charge of selling the surpluses, and this was accomplished with the total tonnage sold on non-traditional markets, a remarkable achievement. Close to 90 per cent of the outlay was returned to government treasuries, making these disaster relief initiatives the most cost-effective in the history of agriculture in Canada. Many growers started again in their restless search for the right varieties of French hybrids and viniferas for the long promised new era of quality wines, from Ontario.

In these five years sales for processing into wines and juice totalled 249,000 tons with 162,000 ton being taken by Ontario’s wineries.

Negotiations for government support in this troubling period consumed significant amounts of time and investment, despite the strong backing from local MP’s and MPP’s. Most of the agreements seemed of the one-minute-to-midnight variety. Yet the same small, inner group, headed by Brian Nash which fought, lobbied, and secured surplus support year by year was, at the same time, leading the Free Trade fight to secure a future for Ontario’s grape and wine industry. These were sleepless years.

This call-for-action concurred with the continued push in plantings by independent growers of French hybrids and viniferas. They asked for better guidance in recommended varieties and prodded senior governments to act against foreign subsidized wines entering Canada. In addition, they outlined the responsibility of the Liquor Control Board of Ontario to promote Ontario products and recommended an appellation for high profile superior wines that was 100 per cent Ontario-grown to serve as the flagship for the industry and detailed the expanded scale of research needed to do so.

The report, two years in development, reached deeply into provincial and federal governments and was not ignored. There was an additional recommendation. A need for close co-operation between the grape and wine industry and government. The significance of this point was not lost on the Board’s directors.

“When I got in the business in 1987, when we were selling our first vintage, the markup for domestic wine at the LCBO was 1%. And the markup for imports was 66%. That was the non-tariff barrier that protected the industry. Nobody had a motivation to change because, I mean, today that markup is 73%, 74%. That was why Free Trade was such a disrupter for the industry. But at the same time longer term disruption was also occurring. There were pioneers and innovators who were proving that we could grow viniferas and we didn’t have to be fearful of being able to meet the market demand with what the market was looking for.”

Brian Nash was a colourful and quotable public figure before any rumblings of the Free Trade Agreement hit the streets. An unashamed Canadian, he’d launched his “Fight for Fairness” on becoming Chairman in 1983, blending blistering attacks on the GATT’s two-faced rulings with comments extolling the qualities of Ontario’s grapes and wines. He was a speaker in demand with business audiences and media.

The battle was steered by Brian Nash and Jim Rainforth, and ably supported by vice-chairman Art Smith. Brian’s battle cry for “a level playing field” struck a public chord and grabbed media attention coast to coast. Week after week he made public new and “newsy” information, unearthed by relentless probing and research.

During the campaign he made 100 speeches, countless presentations to federal and provincial caucuses, and headed the growers in negotiation after negotiation. He had a powerful ally. Jim Bradley, by now Minister for the Environment in the Liberal government, threw his forces into the fight.

Premier David Peterson already knew the growers through being the guest of honour at the 1985 Celebrity Luncheon, and crowning Grape King Peter Van De Laar. Like Jim Bradley he never wavered.

Premier Peterson and Jim Bradley provided an open door and many casual meetings started close to midnight. The Ontario Grape Growers’ press releases, personal media contacts plus reporting on speeches, carried the Growers’ opposition forcefully, and while challenged many times the Board was never proven wrong. It was a constant source for national news.

The Chairman insisted that growers be informed as fully as possible. Brian was appointed an advisor to Canada’s GATT negotiators in Brussels.

The Board stood firmly against internal criticisms. Brian reacted to threats from senior government officials to settle for a nominal sum or they’d “walk away” with a media conference denouncing blackmail tactics.

The growers were ridiculed for claiming 40 per cent of Ontario’s vineyards would need to be removed after Free Trade. The projection proved sadly correct.

The final negotiated settlement brought $100 million for winery support programs including the Grape Adjustment Program, and $45 million for a Winery Improvement Program. Years later Canada’s head negotiator, Simon Reisman, admitted that giving away the grape and wine industry was an agreed prerequisite to Free Trade talks.

Brian declined to stand as Chairman once the campaign had been won. “I’ve been hitting pretty hard for the last four years ... there’s a lot of people out there likely mad at me ... it’s time to go.”

No one had a better knowledge than Art Smith of the deal hammered out with governments in the aftermath of Free Trade. The new Chairman had been in the thick of the fray from the opening volley. Implementing the deal proved a triumph for the Board’s senior officers and particularly for the administration.

All segments of the massive Grape Adjustment Program were handled by the Marketing Board, in its offices on the South Service Road. The organizational demands were awesome, yet the program progressed throughout with cool efficiency and each segment was completed within the budgets’ approved.

8,578 acres of vineyards vanished in the span of six years. More than five million vines were affected; 94 per cent were varieties grown for wines. Qualifying varieties were those the wineries judged as having no future demand.

Under the deal Labruscas would no longer be used in table wines, and of the 2.8 million labrusca vines removed one million were Elviras. In classes 5-7, the French hybrids, removals were 2.2 million, including 1. 7 million vines of red table wine varieties. 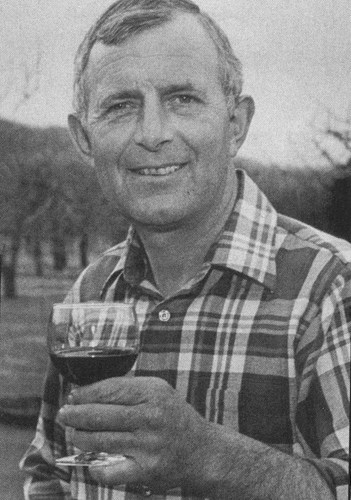 A toast to the future: Brian Nash relaxes after four fighting years of hammering out a package for Ontario’s grape and wine industry.

For the better part of four decades the Grape Growers of Ontario’s Celebrity Luncheon has marked the opening of the Niagara Grape and Wine Festival by showcasing Canadian personalities and celebrating the annual grape harvest. Currently the luncheon is hosted in partnership with the Friends of the Greenbelt Foundation, and Meridian, Ontario’s largest credit union and the third largest in Canada. Celebrity speakers over the decades have included wine maker and comedian Dan Akroyd, award-winning journalist Chantel Hebert, and television personality Rick Mercer

“We are very pleased to support the Grape Growers of Ontario and this important event,” said Edward McDonnell, CEO of the Greenbelt Foundation. “Greenbelt farmers grow more than 80% of the province’s grapes, and the industry is a fundamental driver of Ontario’s agricultural economy.”

There are some great pictures at this site: