Farming has been in the Puddicombe family lineage for centuries, and the farm has been in the family since 1797. At first, his forefathers raised cattle on their 208 acres of land on Highway 8, and started growing fruit in the early 1900s before planting the first vineyard in 1940. Growing up on the farm, Puddicombe admits he never considered anything else. “This was pretty much my calling, you could say. This is what I’ve always wanted to do.” 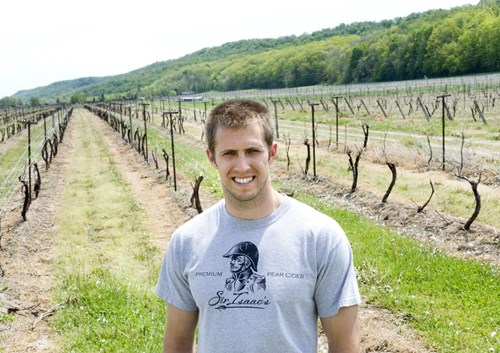 Brock studied at Guelph University, earning a diploma in Agriculture in 2004, before getting his B.Sc. in Horticulture. As part of his studies, he did a semester at the University of British Columbia in Vancouver, concentrating in classes related to Integrated Pest Management (IPM). “You’ve always got to be learning,” he believes. In late 2008, Brock went to New Zealand to spend a growing season at Man of War Vineyards off the coast of Auckland to see how things were done there.

That season away paid off, providing him with new growing techniques. “New Zealand is a very environmentally friendly country—they don’t use harsh chemicals.  I’m proud to bring that to my family’s vineyard. We have only used insecticides once since my return from New Zealand, as a last resort method. I’m of a new age that is more concerned about the environmental balance of the vineyard than my grandfather’s time.”

Along with his parents and sister, he runs Puddicombe Estates Farm and Winery but he wanted to try something else. At just 28, Brock launched Puddicombe Cider Company in July 2011 with his Sir Isaac’s Pure Pear Cider (named for General Brock, as is he). With about 100 acres of fruit on the farm, and about 15 to 20 per cent of the crop not suitable for supermarkets, he wanted a use for these unused tonnes. After some experimenting, Sir Isaac’s was created. The cider has won two silver medals at competitions; as well as Best of Show at the 2012 Hamilton Food and Drink Festival. It’s also the Official Cider of the Hamilton Tiger-Cats. In 2012, Brock taped a segment on CBC’s Dragon’s Den hoping to interest an investor.

If there’s one thing Brock has learned from his years on the farm, it’s that you can’t let Mother Nature ruin you. Each year is different. You’ve got to take what you’re dealt and make the best of it. But he acknowledges that “Mother Nature is a big challenge, especially with climate change. That is potentially going to be a burr in everyone’s saddle,” he said.

As a young farmer, he’s saddened that so few of his generation want to take up farming. “Every year less youth are going into farming, with the older generation hanging on, but they can’t hang on forever.” With no offspring to pass the farm onto when they retire, older farmers are selling off their land. “Some of the best land is being paved over unfortunately,” he laments. He admits he can understand why younger generations don’t want to take up farming, but he encourages them to try it and hopes the government will do what they can to encourage it as well. “I know there’s not much money in farming,” he added. “Farming can be extremely challenging at times, but come fall you get to reap the benefits of your hard labour.”