For Terry Yungblut, making grape juice is a tradition he remembers fondly. “I remember we used to make it on the stove and the steamer  with my mother,” he says. “And we still do the same thing. We steam it. The flavour out of it is unbelievable. Once you smell it, you can’t forget it. The juice just tastes great.” 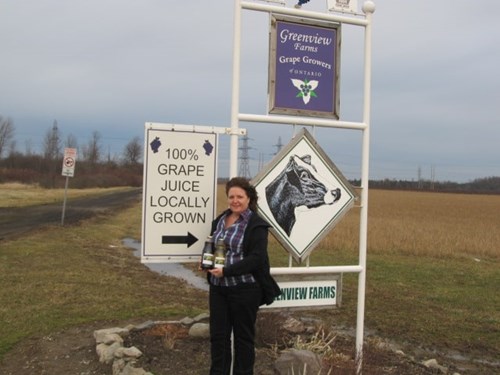 Terry and his wife, Bev, have been selling homemade grape juice called The Juice of Kings since 2008. The name has significance for their family. “The Juice of Kings came from the fact that Terry’s dad was a Grape King in 1968 and Terry was a Grape King in 1984,” explains Bev. “So I thought to keep the tradition and the ‘King’ thing in the family, we’ll call it the Juice of Kings. People like the name. They see it and it catches their attention.” Terry is a third-generation farmer at Greenview Farms in Fonthill.

Greenview Farms is a mixed operation. They have dairy cattle, grapes, and cash crop. “And we produce quite a bit of hay too for the horse market. We deal with those people and we send some hay to Florida. We’ve got different eggs in the basket. There’s never a dull moment in the farm,” Terry says.

He was a child when his father took over the farm after his grandfather died and says he always knew he wanted to be part of it.

“When I was 18, I bought into partnership and I’ve been here ever since. My mother is still at the original farm and my dad passed away. This farm was his life.” Terry says he enjoyed working alongside his father and believes one of the most positive things about farming is a family working together.

“That’s a very important part of the farming world; the prestige of farming, I guess. We know what it’s like to work. Everybody takes their turn. The tradition enters into it quite a bit.” Bev says although “the kids don’t like to work all the time” she believes “it helps to build good character and work ethics.”

And although Terry believes in the prestige of farming, he has concerns about the next generation of farmers. “To get anyone to work on a farm is kind of hard now,” he says.

“The hours are long and nobody seems to wants to do it. The younger generations aren’t going into  farming as in the previous days, and I don’t know what’s going to turn that over...the countryside is degrading pretty fast. We hope it’s going to be here for generations to come. I hope I eat my words.”