Exultet Estates Winery in Prince Edward County focuses on the distinctness of their property. Their “Blessed” Chardonnay has won top honours at the Ontario Wine Awards and the Lieutenant Governor’s Award for Excellence in Ontario Wines. It seems fitting that the winery’s name is Exultet, coming from the Latin word “Exsultet,” meaning ‘to sing praise.’ 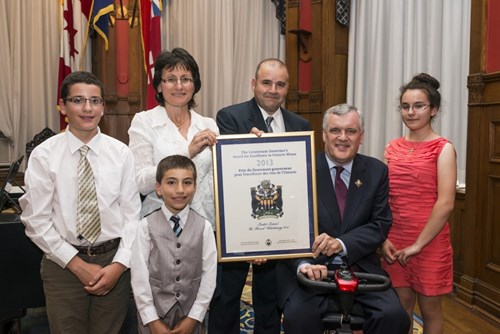 Such a unique winery name is suited to their unique location. Although the Spinosas had the idea of starting a winery in the Niagara Peninsula, the appeal of rural Prince Edward County was preferred. Gerry, having a background in science ; and Lia, a teacher, had been living and working in the GTA and had relatively no farming experience before deciding to make the move.

The Spinosas purchased a 200-acre farm in Milford, Ontario, once the home of a cheese factory, and are now growing a total of 10 acres of Chardonnay, Pinot Noir, Pinot Grigio, and Vidal grapes in its place. The operation is mostly family run with the help of Gerry and Lia’s kids for tasks like cleaning, bottling and harvesting in addition to a couple of foreign seasonal workers.

The original owners of the farm were the Striker family, United Empire Loyalists, who from the early 1800’s operated a dairy farm and apple orchard. In 1870 the milk from the cows was used for cheese production, a popular commodity at the time, with approximately 30 cheese factories existing in the County.  Operations continued until 1956 when the building was abandoned. In 2011, the Spinosas had the building historically designated, and now the former cheese factory houses all of Exultet’s production.

With no previous experience in farming, learning to grow grapes in Prince Edward County has been an ongoing challenge for the Spinosas, but their willingness to experiment with different styles of winemaking continues to set them apart. An example of this would include a recent creation called “Mysterium” which is a white table wine made from red Pinot Noir grapes.

Being a small winery in a relatively new Ontario appellation (Prince Edward County only became a designated viticulture area in 2007), the Spinosas have to rely on what is in the bottle to sell their product. Gerry identifies his winemaking style as “working with the beauty that his property produces”; he views winemaking as a form of art over everything else. Noting that grapes grown on their property yield different flavours from those grown on lands just a half an hour away, they are pleased to see that once people try a wine from Prince Edward County, they can truly appreciate the nuance and character that originates from that corner of Ontario.