Long before Sue-Ann Staff opened Sue-Ann Staff Estate Winery in 2009 on her family’s 100-acre farm in Jordan, she’d already been named Winemaker of the Year at the Ontario Wine Awards in 2002, and short-listed as one of the top Women in Wine in the world at the International Wine and Spirits Awards in London, England. “I achieved success outside first, then decided to bring it back home,” she says. 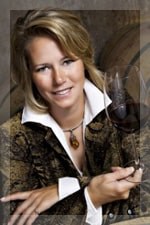 With the Staff family’s background in viticulture spanning five generations and including two Grape Kings (grandfather Lavelle Staff in 1967 and father Howard in 1996), Sue-Ann says a strong influence in grape growing was present since childhood. By 16, she knew she wanted to be a winemaker so everything from that point on “has been focused on (achieving) that.” she enrolled at the University of Guelph, graduating in 1994 with a Bachelor of Science in Agriculture. During her studies at Guelph, Sue-Ann became the first Canadian elected President of the Association of Collegiate Branches for the American Society for Horticultural Science involving all university horticulture clubs in North America. But to study Oenology, she had to study in South Australia at the University of Adelaide because there were only five schools in the world that offered the program in English at the time.

After getting her graduate degree from Adelaide in 1996, she was hired as a trainee winemaker with Simon Gilbert Wine Services in the Upper Hunter Valley in Australia. Since then, she’s visited and worked in France, Germany, Andorra, and South Africa before returning to Niagara. The first vintage from Sue-Ann Staff Winery was 2008, opening the doors Labour Day weekend, 2009.

Having achieved success as a winemaker without the financial commitment and extra work your own winery entails, why did she decide to take the leap? “Touch of insanity and naivety,” is her initial, facetious response. But, more circumspect, she says it was the natural progression from always growing and challenging yourself in order to achieve success.

Sue-Ann’s global experience is reflected in her own winery. Visiting her winery “is a very personal feeling. You pet my dog and come into my kitchen, lean against the counters… and with small groups we’ll sit in my dining room. But it’s not like I have grocery lists on the fridge or pictures of my family on the walls. It’s a commercial homey feel. A very Tuscan or Burgundy feel,” she says, explaining that when you visit a winery in Tuscany or Burgundy, you go into the kitchen. “We all know the best parties are in the kitchen.”

She’s also retrofitted one of the older buildings on the farm into a tank room and storage. The family also helps out from the time to time. “The joke is my winery is everyone’s hobby, whether they like it or not.” Her father and brother help with production when needed, and her mother and sister-in-law help out with hospitality and sales. She also has some staff.

The 35-acres of wine grapes planted on the family farm are on a thin layer of clay over top of stone.  Riesling “is what grows best on this property” along with Cabernet Franc and Baco Noir. Of the 10 products she’s produced, the “focus is on Riesling” with three named for family: Grace’s Dry Riesling, a new wine named for her great-grandmother; Robert’s Block Riesling named after her great-great-greatgrandfather who started their farm; and Riesling Loved by Lu, named after her grandmother whom she often went to for advice while growing up. She’s also produced a new wine, Viognier, a white that’s very floral with a higher alcohol level.

Sue-Ann sees three challenges for the industry with the first, being accessibility to the market. Ontario is one of the few regions that operates under a monopoly—the LCBO. She’s hopeful this situation will improve, but laments that other than the LCBO and her own winery, “there are no other outlets to sell through.” The second involves the “day-to-day business with the LCBO.” Over the years, the number of wineries and wines produced has increased but the LCBO hasn’t really increased their varieties. “In Alberta, you have over four times as many wines to choose from.” The third challenge is one many growers can relate to: Mother Nature. “Sometimes she’s our Fairy Godmother. Other times she’s the biggest bitch on the block and everything in between.” Due to the ever-changing climate, “it’s really hard to figure out which direction to go,” she says.

For new growers, she recommends that they love agriculture. If you don’t care how to grow roses or how apples blossom, she advises, “don’t even bother becoming a grower because it’s all part of horticulture.” The second piece of advice—one she says she can’t stress enough—is to be clear where the grapes you’re growing are going. You have to know who is going to buy your grapes and what varieties; otherwise, you could be wasting time and effort. And the third is to have a commitment to quality. “If you’re not committed to quality, don’t even bother. We don’t need any more $6 bottles of wine. In order for Niagara (wineries) to succeed, we have to be focused on quality.”