Growing up on a farm that has been in the family for 3 generations means that Ryan Bosgoed knows the conditions that surround his land. Reminiscing about dirt-biking around the farm as a child, the Bosgoed Family Farm is the forefront to most of Ryan’s childhood memories.  His parents and grandparents have been successful growing produce such as tomatoes, onions, and cabbage.  After taking over the farm, Ryan hopes to continue that success story with grape growing. 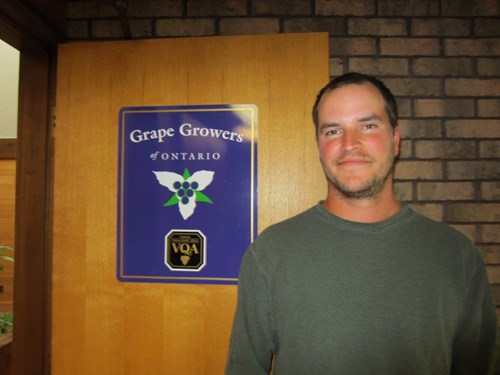 In 2004, a dinner conversation between Ryan and his father John sparked the idea of trying to grow grapes on the land that has previously only grown vegetables. They decided it was worth a try, and Ryan planted 15 different varietals of grapes on a quarter acre of land. The experiment was to see which varietals grew best with the least management practices in the southern Ontario, Norfolk County climate. The result? Riesling, Pinot Noir and Cabernet Franc flourished in the area, and now a total of  five and a half acres of grapes are planted on the Bosgoed farm. This experiment gave Ryan the confidence to know he can grow quality grapes on his property, and use the conditions present in Ontario’s South Coast to his advantage.

It was always in the back of Ryan’s mind that he would take over the family farm. To that end, he attended Niagara College’s Wine and Viticulture program and credits his professors who are from, and work in the industry.  He tells current students, “Listen to what your professors are saying, you will use it!”

Working for 3 years in the barrel cellar at Jackson-Triggs Winery in Niagara-on-the-Lake, Ryan was able to gain more practical experience within the industry, as well as experience how a large-scale winery operation works. Ryan came to the realization that the love of nature and farming was “in his blood” saying that “city life wasn’t for him.” Ryan’s next goal was to bring the “winery culture” that he loved back to his home of Turkey Point.

Currently, Ryan and his wife Shantel along with their son live on the hundred-acre family farm tending to both the vegetable crops and the vines in the vineyard. Everyone helps out where they can, including Ryan’s son who is always trying to see what everyone is doing. Both sets of parents are actively involved in the farm, with Ryan’s parents advising on the conditions of the land, and Shantel’s parents helping where they can.

Besides growing grapes, Ryan is also active in associations, having joined the Grape Growers of Ontario as a Board Director, as well as a Director with the Ontario South Coast Winery and Growers Association (OSCWGA). Ryan is committed to the goal of achieving Designated Viticulture Area status for Ontario’s South Coast, which he believes has great potential to grow some world-class Ontario wines because of the unique terroir of the area. Ryan likes to spend his down time bike riding, and in winter sports such as hockey and snowboarding.